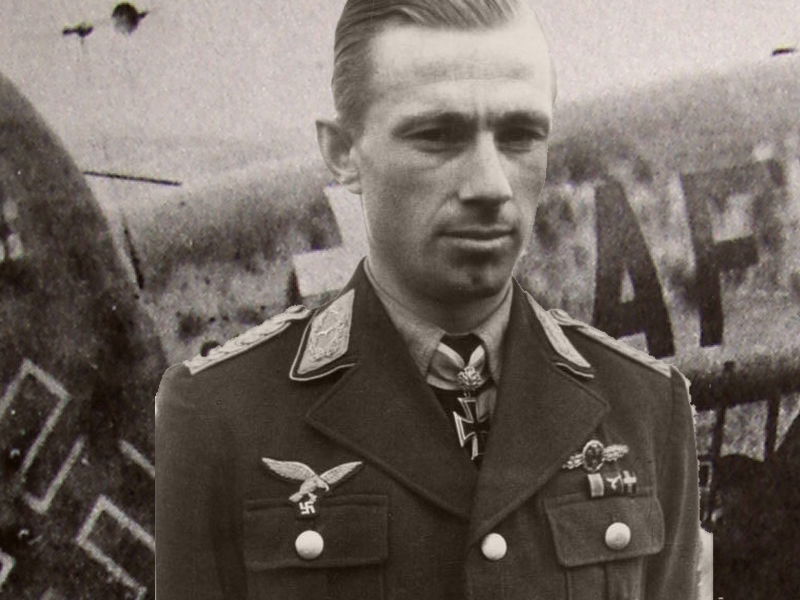 14th January 1944
Weather: Fine and sunny all day. Air Tests and a Height and Load Test took place in the morning. Main Briefing took place for the first time in the New Briefing room. The Group Gunnery Leader – S/Ldr. D.H.K. Keary, DFC – paid a visit to the Squadron in the afternoon. The Group Intelligence Officer – S/Ldr. E.E. Colquhoun, the Group Engineering Leader – F/L R. Holmes; DFC, the Public Relations Officer – S/L. L.A. Nickolle also visited the Station and were present at the Briefing and Interrogation of crews.

BOMBING – BRUNSWICK
23 Aircraft were detailed for Bombing Operations. 3 failed to take off, 4 returned early and 2 failed to return. The remainder carried out their mission successfully and returned to Base. Believed to be a good raid. JU88s were seen firing rocket projectiles. Photos of Brunswick are largely cloud. No results observed.

LL685, A2-G. Intercepted at 105 hours by a night-fighter flown by Hptm. Walter Barte of Stab III./NJG3 West of Bennebostel and crashed 5km S of Celle. Crew all KIA; they are now buried in Hannover War Cemetery.

LL679, A2-J. Crew all KIA and buried in Hannover War Cemetery. Probably victim of night-fighter. Stated on www.lostaircraft.com to have crashed at Lauenberg, SE of Dassel, however this appears to be a long way South of the bomber stream. It is possible that LL679 fell victim to Maj. Helmut Lent of Stab./NJG3 who is credited with an unidentified Lancaster at much the same time and place as LL685 above.